How to take care of your lungs as a gamer: Breathe Better to Game Better 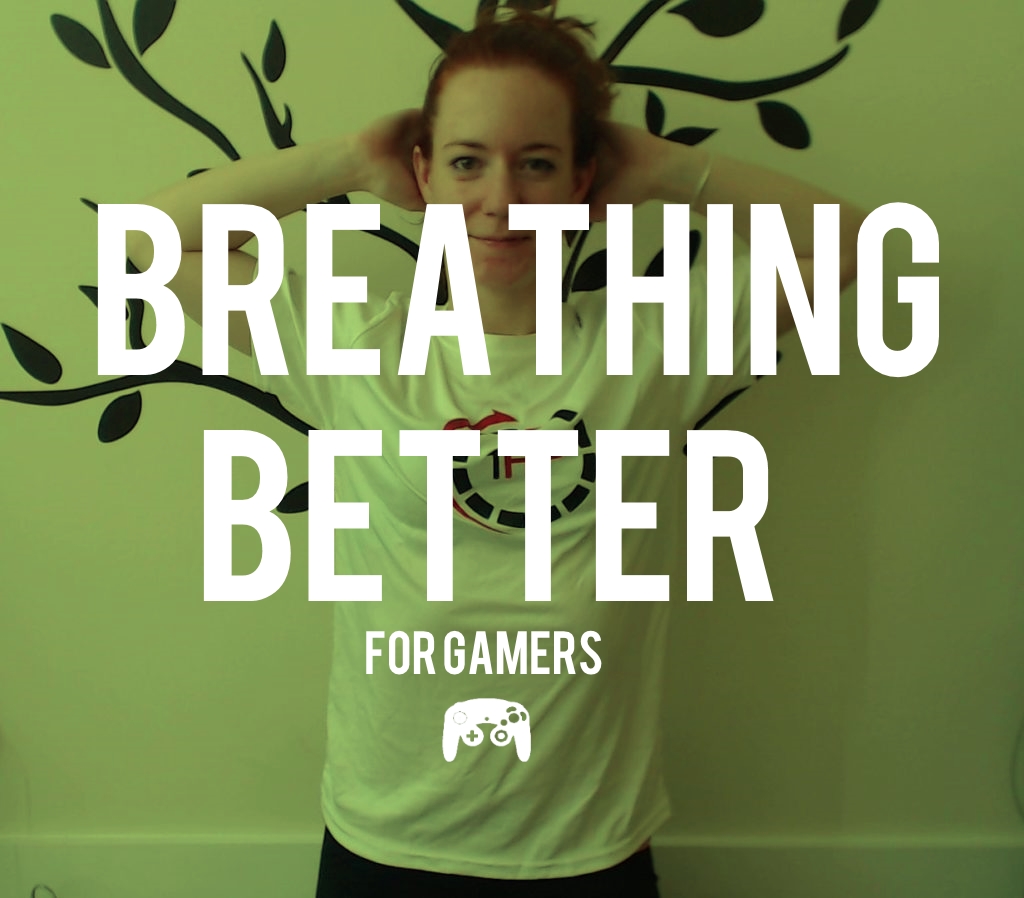 04 Jun How to take care of your lungs as a gamer: Breathe Better to Game Better

WHY BREATHING IS IMPORTANT FOR GAMERS

I Know. You’ve been breathing for at minimum a decade right now (I’m being generous with the possible minimum age of our readers) and probably for much longer than that, and unless you’ve had asthma or pneumonia, you’ve probably been doing it pretty well. You’ve probably also been doing it without much thought.

But what do you think happens after we are sitting for three hours straight chasing that W after a crappy solo queue run…? Our posture is not likely to be that great… unless you’ve been a long-time reader here at 1-HP and have been incorporating all of our great strategies for improved posture.

But lets say you’re not! The hunched over posture of gamers beaten to death in memes makes it difficult for our rib cages to expand and again.. makes it difficult for us to breath. Crappy breathing means less oxygen to our brains and muscles which is needed to function over these long periods of gaming. And while there isn’t a direct causal relationship – we believe posture and breathing are contributing factors to the occurrence of these esports injuries

Fortunately, it’s both possible and valuable to incorporate breathing into your stretching and rest breaks. Increased oxygen availability results in increased amounts of oxygen being carried to your brain, which impacts focus, attention, alertness, and responsiveness.

There’s a natural human tendency to hold our breath or to breathe shallowly when something is difficult; breaks are the perfect time to compensate for this tendency and cue ourselves into better breathing patterns.

BREATHING: HOW DOES IT WORK?

There are two main phases of breathing: inspiration (or inhalation) and expiration (or exhalation).
Inspiration or inhalation is the “breathing in” phase. During this phase of breathing, the diaphragm, a large muscle at the base of your lungs, contracts to allow the lungs to expand. Air enters the large pathways of your lungs (bronchi) and travels all the way down to the alveoli, small sacs at the end of the branching pathways of your lungs. Your alveoli is where red blood cells exchange the old, leftover carbon dioxide they’re getting rid of for the oxygen you’ve just breathed in. To an extent, the longer you put off expiration or exhalation, the longer your body has to perform that exchange.

(I say “to an extent” because eventually, there isn’t any more oxygen to exchange and your body is just holding on to carbon dioxide, and that’s not useful for what we’re trying to do. However, some of the exercises we go over later will offer ways to increase the amount of time available for oxygen exchange.)

Expiration or exhalation is the “breathing out” phase. During this phase of breathing, all the carbon dioxide that’s just been “dumped” by your red blood cells is expelled. Your diaphragm expands as your lungs contract.

Inhalation and exhalation are mostly powered by your diaphragm. There are other muscles that can be used to help, but for the most part, the primary purpose of those muscles is postural stability in the neck, upper back, and torso. They’re useful for heavy breathing during significant exertion, but will quickly become overused if used for breathing at rest.

BREATHE BETTER AS A GAMER: EXERCISES YOU NEED TO KNOW

For that reason, three of the breathing exercises we’ll go over focus on the diaphragm. The other two exercises are designed to help increase the amount of time you have for oxygen exchange.

Together, they shouldn’t take you more than 5 minutes to do, and can actually be incorporated into your breathing patterns while playing, working, or doing other mobility/stretching/strengthening exercises.

Start with one hand on the flat part of your chest just below your collarbones and one hand on the soft space just below the bottom of your breastbone. Your bottom hand is approximately where your diaphragm is located. As you breathe in, try to breathe into your belly and push that muscle out against your hand. The hand on your upper chest shouldn’t move at all—try to keep that area still.

1HP Rx: Do 10 slow, deep breaths, breathing in through your nose and out through your mouth. Try to do this before you start your game or after. Choose your own adventure 😉 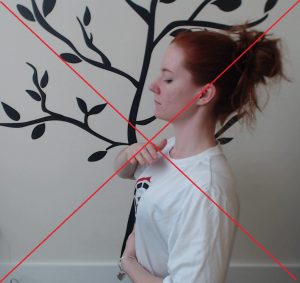 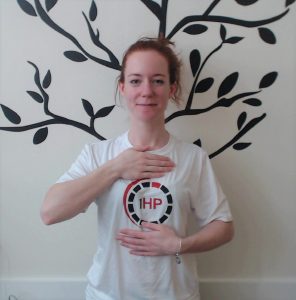 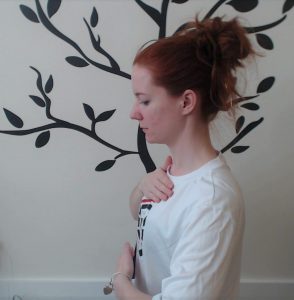 Start with your arms at your sides, elbows bent, palms facing up, like you’re about to carry a tray. Using the same diaphragmatic breathing motion as earlier—breathe into your belly, not your upper chest—take a deep breath. At the same time, pinch your shoulderblades back and rotate your arms out, keeping the upper part at your sides but bringing your forearms out until they’re parallel to your shoulders. As you breathe out, rotate back in.

1HP RX: Do 10 of this exercise, before you start your game or after. Choose your own adventure

Diaphragmatic Breathing with Hands Behind Head

This exercise is similarly designed to stretch the chest and strengthen the upper back. Start with your hands behind your head, elbows bent and forearms parallel to your head. As you take a breath in using the diaphragmatic breathing motion, bring your elbows back and open your chest. As you bring your elbows forward once more, breathe out.

1HP RX: Do 10 of this exercise, again before or after your game to help you feel better. 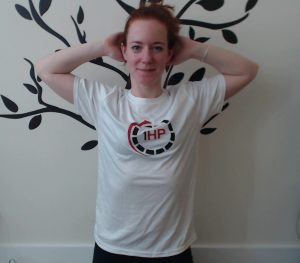 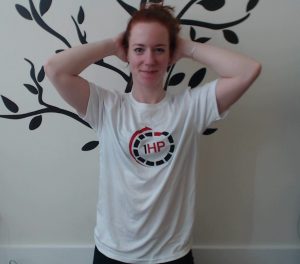 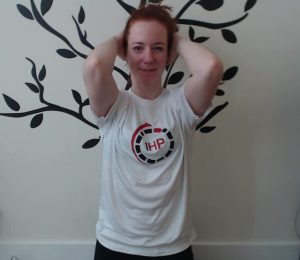 This next strategy is one that you can use to increase the amount of time your body has to exchange oxygen and carbon dioxide. When you exhale, purse your lips together like you’re trying to whistle. Breathe out slowly, only letting air through that small opening in your lips. This strategy is more useful in conjunction with other strategies, like diaphragmatic breathing or inspiratory holds.

This last strategy isn’t so much an exercise as it is an “add-on”, something you can use in conjunction with other exercises to increase the amount of time your body has to exchange oxygen and carbon dioxide. Rather than breathing out immediately after breathing in, hold your inhalation for a count of three. Even better, take a diaphragmatic breath in, hold for a count of three, then breathe out using pursed lip breathing.

In addition to doing exercises, you can cue yourself into better breathing patterns on a regular basis.

One of the easiest ways to do that is with good postural cues: chest up, shoulders back. Imagine that there’s a string attached to the top of your breastbone that lifts your chest up. You’re not puffing your chest out or trying to look like a soldier at parade rest; you’re just keeping your chest lifted so there’s more space for air to fill your lungs.

Keeping your shoulders back but relaxed and your chin tucked will also decrease your use of accessory breathing muscles—the muscles of your ribs, upper chest, and upper back—and allow for easier diaphragmatic breathing.

Last, make sure you’re well-supported in those positions. If you need to bolster your low back with a pillow or folded towel, do it. If you need to increase the height of your armrests with padding, or adjust the position of them, or pick up clamp-on armrests that attach to your desk because your chair doesn’t have them in the first place, do it. You’ll find yourself more comfortable and less injury-prone, and you’ll probably find it easier to breathe.