OVERWATCH WRIST PAIN: FROM CHRONIC TO PAIN-FREE IN 8 WEEKS – PART 1 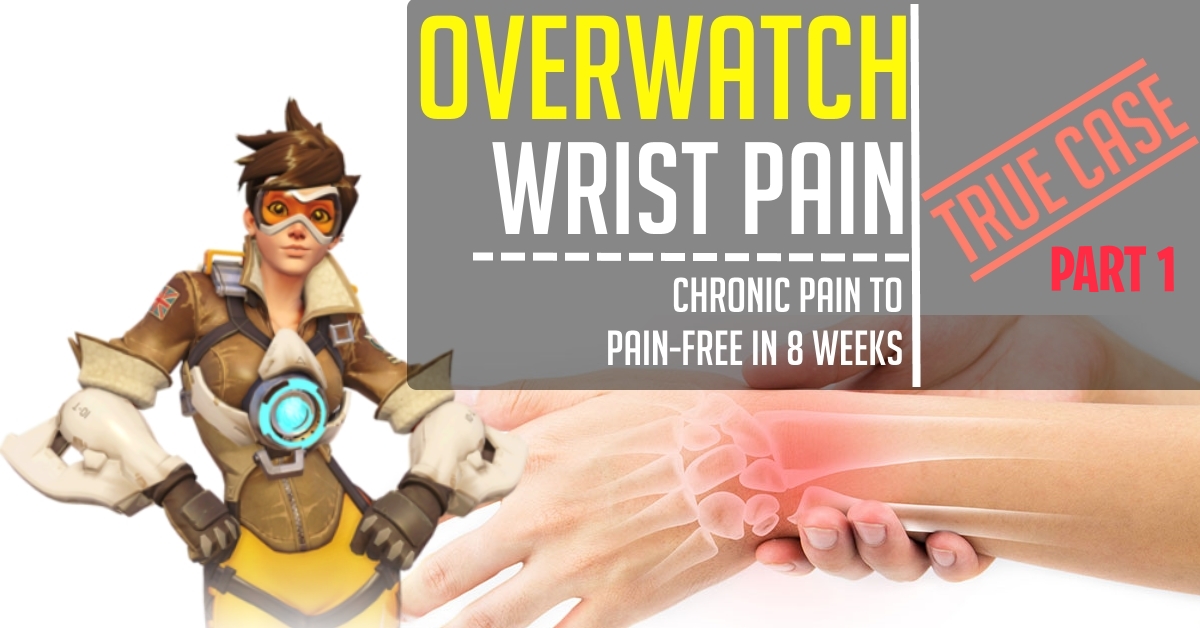 Hey guys! Super brief intro because I want to get into this case study asap. This is a new article series on how I have helped gamers of all levels (pro/casual) get back to playing. It is a way for you to learn how they managed their pain and how you can do the same 🙂

BRIEF PICTURE OF THE PLAYERS PAIN What’s Happening: R. wrist pain in the region shown to the right

What is the player feeling? Anon1 reported “numbness” and aching pain on the top side of the wrist as shown in the picture. Anon1 stated the pain is unpredictable but generally is worst in the morning, worsens with increased play time, and improves with rest.. Anon1 has been dealing with the pain for about 6 months.

What’s Happening (medically) with this player?

This player is dealing with a case of chronic tendinopathy at his wrist. The tendon involved is the common extensor (see image below). Due to the chronic nature of the injury the tendon was irritated and inflamed enough to put pressure on nerves in the surrounding area, causing the numbness.

What I did on day 1 – Evaluation, Education, Exercise

First, I confirmed what was happening with certain clinical tests. I ruled out the neck and shoulder as potential sources of numbness. (They’re often the root cause! Which is why posture is so important.)

Source of Pain: After a thorough examination we identified the source of the pain to be the common extensor tendon.

Cause of Pain: Through testing, we determined that the pain developed as a result of three things (in order of importance) What a surprise huh? As I have mentioned so many times: too much play and poor posture are typically the cause of these type of repetitive injuries. The weakness is likely a result of continuing to play despite his slight pain leading to a cycle of pain -> rest -> weakness -> feeling better -> play until pain -> rest -> etc.

I helped Anon1 understand this cycle as the pain had been behaving in this exact way for the past 6 months. Anon1 had rested when the pain was bothering/affecting his play but did not do anything to work on the weakness. I informed him it would take 6-8 weeks of consistent exercise (based on his weakness level) to improve his symptoms. I then gave him an exercise program to perform consistently.

Keep in mind this worked for Anon1 based on the specific things I was able to identify during testing. This however can be a good general wrist management program for those who have wrist pain in the same area. Always seek out a Physical Therapist to receive a diagnosis and individualized treatment program for yourself!

First thing I asked Anon1 to pay attention to was how long he was playing for and if he could identify a specific amount of time at which irritation first started. This would allow the player to determine his “endurance limit” or the length of time he can play until it further irritates or worsens his condition. Anon1 was instructed to play just shy of this or up to this point.

Ex: If Anon1 felt irritation around 2-3 hours the player was instructed to play for 2 hours, rest for 30 minutes, perform stretches as provided below, and then return to playing

I also informed the player it was important for him to listen to his body and become more aware about how his body works to ensure the condition does not worsen and to allow him/her to prevent it from returning in the future.

Stretching to undo stress of repetitive activity after gaming

Over the course of 4 weeks, I saw this player 1x/week to provide manual therapy (massage, kinesiotaping, IASTM, manual strengthening techniques). During this period of time Anon1 was consistent with his exercises and did not play as frequently due to scheduling changes which reflected in an improvement in his symptoms.

Anon1 had reported he no longer felt any pain, even during play, only slight numbness which occurred in the same area. Anon1 mentioned it continued to be worse in the morning. This led me to believe the player’s sleeping position was influencing this morning-based sensation. This is a common occurrence for many gamers who have wrist pain. When we sleep we often roll onto our wrist and cause it to bend for extended periods of time. This causes discomfort and pressure on our joint/superficial nerves, leading to numbness (like Anon1 felt).

As a result of my suspicion that sleeping position was affecting the player’s AM sensation, I recommended Anon1 use a wrist splint at night while sleeping to keep his wrist in a neutral position and prevent excessive pressure on the his wrist/nerves.

At the four week mark we re-evaluated the player’s strength, length of play and overall posture (see table below)

The combination of these led to the reduction of Anon1’s pain as he was able tolerate the current load of play without tissue irritation. With repetitive strain it is all about load management and improving load tolerance.

This ends PART 1 of this case study – in the next part you find out how Anon1 does at the end of the 8 weeks and the IMPORTANT LESSONS YOU NEED TO KNOW if you are dealing with wrist pain as an overwatch player. Check out PART 2 HERE