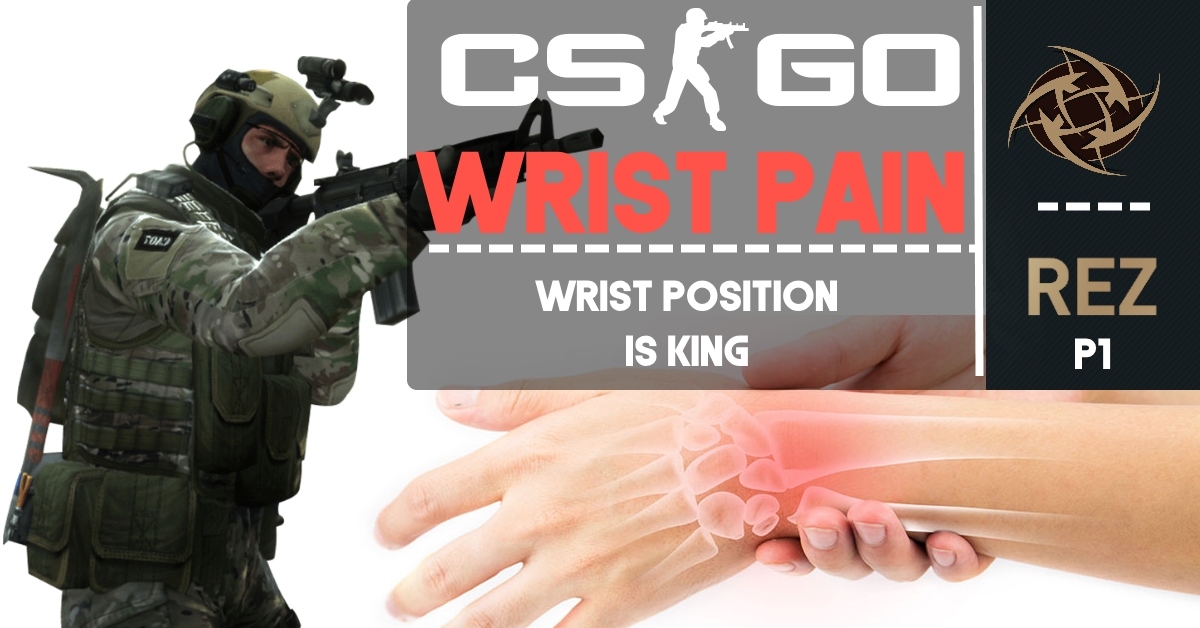 Welcome back to another case study! We are very fortunate with this case as the professional player has agreed to allow the details of his case be known to benefit the community and help others who experience similar pain. So… without further ado… here’s how I helped Rez from NIP resolve his wrist pain in 5 weeks

BRIEF PICTURE OF THE PLAYERS PAIN

What’s Happening: R. wrist pain in the region shown below

P1: Rez reported right handed wrist aching in the region shown in the picture along the pinky side of his wrist. The pain was rated at a 2-3/10 after about 7 hours of gaming. It takes about 1 hour for the pain to subside and is accelerated by stretching & ice.

P2: Additionally he reported constant 6/10 sensation of pressure at his wrist which made him feel the need to consistently stretch during his game play.

What he was looking for with Physical Therapy: His main goal with Physical therapy was to address his injury early on and figure out what he could do to prevent this from affecting his career.

After working with him to understand a couple of other important factors (scrim schedule, computer time, day to day activity) I was able to figure help him understand what he was dealing with.

What’s Happening (medically) with this player? This player is dealing with a case of acute tendinopathy for his wrist. The tendon involved is the right extensor carpi ulnaris  It is related to overuse due to how he positioned his wrist when he played. This caused the tendon to become irritated much earlier than it would if he had a more neutral position of the hand (i’ll show you what I mean below). The stiffness sensation is local inflammation and irritation of his wrist joint – with injuries our body naturally wants to protect itself causing it to stiffen up in the local region to minimize extra stress.

DAY 1 – EVALUATE AND PROVIDE THE PLAN

As with all physical therapy evaluations – I went through thorough questioning and clinical tests to rule out more serious involvement. I was able to confirm my suspicion of tendon-based pain through some clinical tests and inquiring about the history of the pain. Here are the results of the evaluation

Source of Pain: We identified the source of the pain to be the extensor carpi ulnaris (right) & radiocarpal joint (P2)

Cause of Pain: Through testing, we determined that the pain developed as a result of two things (in order of importance) 1. Improper Mouse Ergonomics – the player held the mouse in a tilted position

One of the first things I like to see is how gamers use their peripherals. While there is so much information out there about proper ergonomics with mouse use, even professionals tend to adopt poor habits which lead to overuse and wrist pain.

Rez played with his mouse near the edge of his table with his wrist tilted towards his pinky (ulnar deviation). This was his STARTING position – which means he moved back and forth from that position during gameplay. Any flicks toward the right would be limited due to the already SHORTENED position of the muscle. This was the MAJOR cause of why the muscle would fatigue more quickly and cause the tendon to become irritated after long days of play.

I talk about this in the supplemental youtube video here

2. General Weakness and poor endurance of his wrist muscles (controlling side to side and lifting mouse movements) (see below for measurements) Rez’s wrist endurance was quite below average on BOTH sides – which was definitely a risk for him developing further issues if it was not addressed. Being that both sides were quite weak – I helped Rez understand that it was his ERGONOMICS and MOUSE POSITION which was the MAIN cause of his pain – with his wrist conditioning being a partial contributing cause.

Based on this and his upcoming schedule – I had to work with him to make the proper change with his mouse position without affecting any upcoming performance. I helped Rez understand it could take up to a 3-5 days to get used to a new mouse position (almost like changing sensitivity) but also 4-6 weeks to make a change in strength based on his weakness level. We then went on to discuss his specific program Keep in mind this worked for Rez based on the specific things I was able to identify during testing. This however can be a good general wrist management program for those who have wrist pain in the same area. Always seek out a Physical Therapist to receive a diagnosis and individualized treatment program for yourself!

At the time of our evaluation – Rez was scheduled to head to Cologne for a tournament and it was important to have the discussion of how to address his pain during this important time. I understood there would likely be performance detriments if I asked him to change his mouse position just prior to the tournament – so instead the plan was to modify his wrist position AFTER THE TOURNAMENT

This was agreed upon by both of us. Because the injury was mild in nature we decided it would be best to first work on addressing his other impairments (weakness of the wrist, poor general health management of his wrist & hands) in addition to managing his pain over the course of the tournament.

I helped him identify the proper times to perform these exercises throughout the day in order to avoid fatiguing his muscles prior to play (for Rez this was either in the morning or after practice). With regards to the stretches –

As I have mentioned, the timing of the stretches are extremely important. Muscles tend to stiffen up after repeated use (over the course of a scrim block or lengthy gaming/computer session) so the best time to do these stretches is IMMEDIATELY AFTER THE SESSION!

Closing up: It’s all about how much effort you put in

It is important to understand as a gamer what you need to do in order to return to play at 100%. I made sure by the end of our initial visit it was clear Rez understood exactly what he needed to do over the course of the next 4-6 weeks to recovery fully. This is why I did not need to see him for about two weeks and scheduled our follow-up for that time.

Two weeks later and after his tournament we followed up to monitor his progress with the rehab program. At this time Rez had already returned from Cologne and informed me he had 2-3 days to already change the position of his wrist while using the mouse. He reported that he immediately felt much better and with less tension and that playing for the 2-3 days had already allowed him to be comfortable.

During this time he also reported doing the strengthening exercises as much as possible during the course of the tournament but very consistently stretching (I also informed his coach on his program to ensure he understood what Rez needed to do).

P1: For P1 he reported the pain was now 1/10 (previously 2-3/10 after about 7 hours of gaming). He had reported he had been playing less since returning to focus on the exercises. Rez definitely noticed an improvement with P1

P2:  For the pressure in his wrist – he also stated the sensation was NO LONGER CONSTANT. He only felt slight need to stretch after 3-4 hours. Felt this was improving significantly with better general management.

At the two week mark we re-evaluated Rez’s endurance, posture and general wrist management with his schedule (see table below)

This ends PART 1 of this case study – in the next part you find out how Rez does at the end of the 6 weeks and the IMPORTANT LESSONS YOU NEED TO KNOW if you are dealing with wrist pain as an CS:GO player. CHECK OUT PART 2 HERE