FLEXISPOT STANDING DESK FOR GAMERS? – A REVIEW FROM AN ESPORTS PT| 1HP Reviews 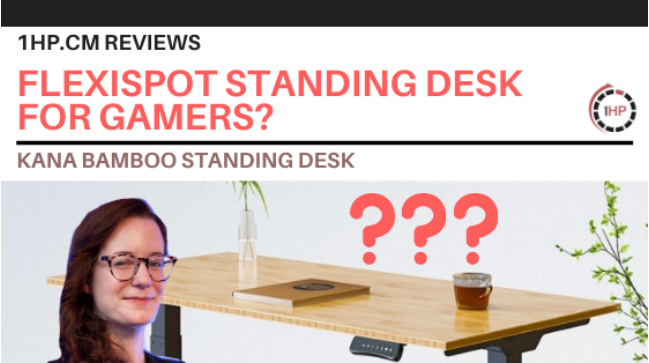 If you’re on TikTok, you’ve probably seen videos featuring the Flexispot adjustable height desk. Even if you’re not on TikTok, you’re probably aware, at this point, that medical professionals recommend sit-to-stand desks for gamers and office workers as a more ergonomic alternative to the standard seated-only desk. Want to see if the flexispot is a good option for you? Check out my review

Sit-to-stand desks can be a great way to get some temporary movement between blocks of gaming or extended sessions. With a mechanical desk like this one, you can transition seamlessly from sitting to standing during a respawn, getting health benefits and staying in the game.

NOTE: I was provided a basic model flexispot Kana Bamboo sit-to-stand desk and asked to review it for free. While a link to the manufacturer’s site is included, I do not receive any commission or any affiliate benefits if you choose to purchase one.

The Flexispot base comes in a fairly heavy package. I strongly recommend using either a two-person lift technique or a handcart to transport it. I received the 48” bamboo desktop in a separate package. While bulky and awkward, it was light enough that I could carry it on my own.

I’ve assembled a pretty wide variety of furniture over the years, from Ikea bookshelves and desks to handcarved wooden bedframes to a really complicated 6 foot tall cat tree. Assembling this desk was among the most frustrating assembly experiences I’ve ever had.

The directions do not appear to be written by a native English speaker. The drawings are quite small, making it hard to see some of the smaller details that indicate what direction a piece should face. 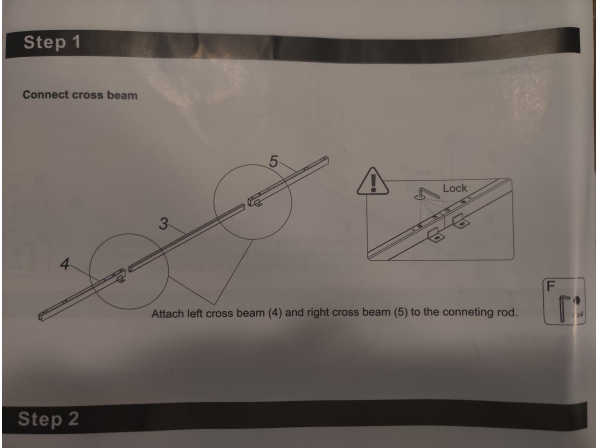 Some pieces, described in the instructions as unassembled, in fact arrive already assembled. While most of the tools required for assembly are included, you will need a power drill in order to drill pilot holes for some portions.

Due to the layout of the legs relative to the desktop, it’s very difficult to see and therefore align the screws attaching them. And due to the insufficiently clear instructions, on two separate occasions, I had completed approximately 90% of the assembly before realizing a piece had been placed on the wrong side near the beginning of the assembly process.

Cait’s Tips: If you do purchase the Flexispot desk, keep in mind that there are a variety of desktop lengths available. The piece which attaches to the length of the desktop can be adjusted, and may need to be adjusted for alignment purposes relative to the position of pilot holes as well.

Flexispot Standing Desk for Gamers: Daily Use and Appearance 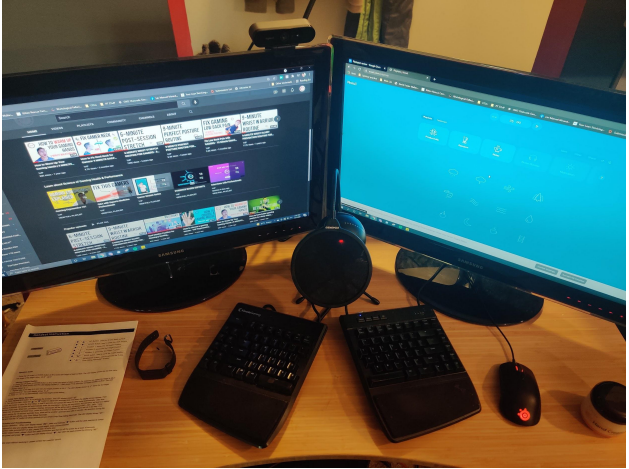 The bamboo desktop is a light wood color with visible grain, which I like for my particular aesthetic. Other models of Flexispot desks come with a wider variety of desktop color options, including plain black or white without grain.

In spite of the difficult assembly, I’ve found the day-to-day use to be quite easy and comfortable. On the model I received, the front curves away, giving you more space to sit close. Once you’ve found a height that’s comfortable for you, you can program the desk to remember that height and automatically return to it with a single button push. I use this feature to transition between sitting and standing without having to waste time adjusting each go-round. 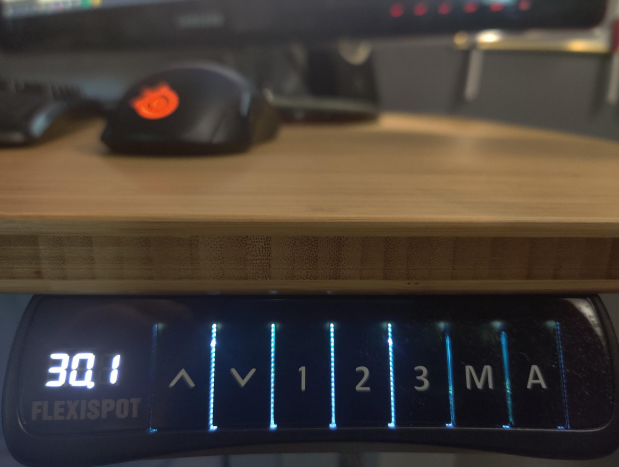 With the 48”x24” Kana bamboo desktop, I’m able to fit two 27-inch monitors, a split keyboard, a desktop microphone, a notebook, and a water bottle without any difficulty. Larger desktops (up to 72”x30”) are available as well.

I’ve tested the desk with a variety of chairs, and found it capable of adjusting to all of them easily.

The desk also comes with a feature that can remind you to change positions after a set amount of time. The alarm is definitely noticeable, but in a somewhat annoying and disruptive fashion. I like the concept of this feature, just not this specific implementation of it.

I’ve completed almost all of my work alternating between sitting and standing positions over the past two weeks, and I do feel much more focused than when I’m just sitting. I’ve also gamed in both sitting and standing positions, and found both to be equally comfortable. However, for more focus- and aim-heavy games, I had a hard time getting enough forearm support in a standing position due to the shallowness of this desk. Without armrests, about half my forearm hangs off the desk, which caused some feelings of instability when I was trying to complete more precise aiming tasks in Aimlab.

Overall, I’m still a big fan of adjustable height desks. This is certainly not a bad one, and it’s reasonably priced at $410 for the base model Kana Bamboo Standing Desk, which is what I reviewed. Other Flexispot models start at $210, and generally, these desks are competitively priced. I also like that this particular desk is part of their One Tree Planted project, in which they plant one tree for every bamboo desk purchased. It’s unclear what kind of tree is planted, though, and given that bamboo is an invasive species in areas to which it is not native, this comes with a caveat. It’s also not clear where this product is produced, as this is not listed on their site or in any of the materials I received.

I can’t unequivocally recommend this in light of the difficult assembly and the concerns mentioned above. However, if you’re looking for a mid-budget sit-to-stand desk, this is a reasonable option.